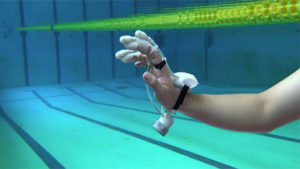 Think the FitBit is the best wearable tech design? Our friends at Tsukuba University in Japan begs to differ! They’ve developed an electronic glove that uses sonar technology to allow the wearer to “feel” objects underwater without touching them. As a wearable tech design firm, we’ve seen our fair share of clunky wearable tech which is why this new device is so refreshing – it fits like a glove!

Named the IrukaTact, the glove works to translates sonar signals into haptic sensations. Directed by the fingertips, the wearer can detect how close an object is through the varying water pulses and rhythms generated by a three small motors – the closer an object is, the harder the jets pump water. The ultrasonic device truly sets IrukaTack’s wearable tech design firm apart from the rest! 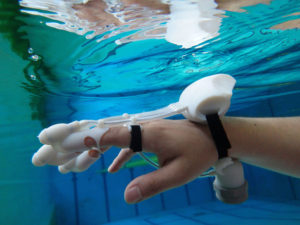 A minimalist and functional design ensures that the wearer can still use their gloved hand freely. As a leading wearable tech design firm, we agree this design is optimal for the most flexible and capable extremity. The design is further streamlined with the sonar senor connected to the middle finger by only a thin tube. This ensures that sensor is always pointed in the same direction as the palm as well as overall simplicity. As of now, the sensor is powerful enough to detect objects 2 feet away underwater, and researchers believe this range will soon be extended with no cost to comfort and style.

First responders always need a helping hand, especially when water visibility is low. Flood victims, lifeguards and emergency rescue crews would greatly benefit from wearable tech as it maximizes the rescue scope while minimizing risk. The designers have also partnered with Ars Electronica to make IrukaTact available in the form of DIY 3D printing instructions. With a sonar sensor, microcontroller, motors and a 3D printer, you too could have your very own haptic water glove. We’re sure all our fellow wearable tech design firms would agree, having the ability to feel without physically touching an object is truly innovative!